The Trinity Doctrine is False 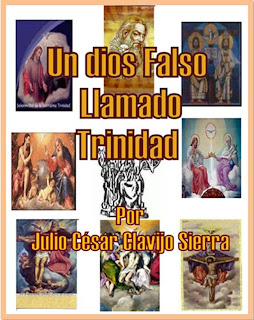 This book shows the primitive origins and different concepts about the trinitarian god, the development over the centuries of these concepts, the formal adoption of this belief, a belief the trinity as it is presented in modern times, and the main trinitarian statements that the Catholic organizations have taught for over sixteen centuries, as well for modern Protestants over four centuries.

A false god Called Trinity, is a great work of analysis on this erroneous doctrine and comprehensive rebuttal to those arguments raised by the trinitarians throughout history. For the Jesus name Church, this material is a valuable tool for defending the faith and for education.

To read other books in the apostolic doctrine, please visit the megapage in spanish, Pentecostals of Jesus name http://www.pentecostalesdelnombre.com/

Chapter 1. The Triune god is Not the God of the Bible

Chapter 2. Trinity and its Pagan Origins

Chapter 3. Old Tradition and Philosophy in the Development of Trinity Doctrine

Chapter 5. The Trinity Theology Denies the Mystery of Godliness

Chapter 7. The Fallacy of the Trinity's Law or that all the Universe is Trinitarian

A myth borrowed from paganism. Trinitarian arguments. Is it true the law of the trinity teaching or the universe is trinitarian? The example of multiplication by one. The modern Physic teaching contradicts the so called Trinity's law and that the universe is trinitarian. The space-time. The matter and the energy are the same thing. The atom is composed of more than three corpuscles minors. There are four states of matter, not three. The example of the equilateral triangle. The triangle as a symbol of the trinity. The triangle was used as a symbol of Trinities from pagan religions. The man is an example of the Trinity's law? Conclusion.

The Hebrew word "El". The Hebrew word "Eloah" and its Aramaic equivalent "Elah". "El" and "Eloah" are singulars forms while "Elohim" is a plural form. The argument of the trinity doctrine. Refutation of the trinity argument. Trinitarian predisposition. How many people might it would refer? A polytheist statement. When Elohim means gods (with small "g")?. "Elohim" is applied individually to false gods. "El", "Eloah" and "Elohim" are used interchangeably to refer to God. An expression to the exceeding greatness of Creator's power. A common use refered to spiritual beings. also used to human authority. One true Elohim. Elohim is the Father. Jesus is Elohim. Conclusion.

Chapter 10. The Lord God And His Spirit

The trinitarian argument. Refutation of the trinitarian argument. God is Spirit. Similar to the expression "a man and his soul. Isaiah 48 speaks of one God. God is the Holy Spirit. Does that make a third person? Only there is one Spirit (with capital letter "E"). The Holy Spirit is the Father. The Holy Spirit is Jesus. Jesus promised us give us a mouth and wisdom in the hour of trial. Jesus is the one that sanctifies. Jesus is the comforter (parakletos). Is Jesus who speaks to the seven churches of Asia in the book of Revelation. The Lord Jesus is the Spirit. Jesus is Jehovah, therefore He is the Spirit of the Jehovah. One Lord. Jesus is the only Lord. Three spirits?. The Spirit of the Father and the Son, is the only one Holy Spirit.

Chapter 11. The Right Hand of God

The trinitarian argument. Refutation of the trinitarian argument. Three divine persons talking each other?. Elohim. The Lord God and His Spirit. Echad. The three men who visited Abraham. The angel of Jehovah. Two Jehovah?. The Blessing of Jacob to Joseph. What about another triple repetitions. Messianic prophecies. The wisdom. The Son of Man and the Ancient of Days. The son of the gods. Conclusion.